Liability for Flood Damage Due to Levee Failure 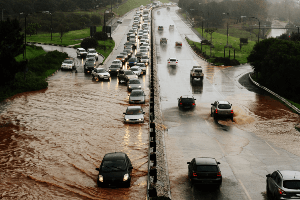 Although heavy rain is common in California between November and March, this rainy season has been completely different.

In the last couple of weeks, Northern California has been hit with a series of storms that have caused multiple levee failures along the Consumnes River. Crews working to repair the breaches have said this is the worst levee failure the state has seen in decades. The breaches have caused severe flooding that has left tens of thousands without power and has caused significant property damage.

If you were injured or lost a loved one in an accident related to levee failure, you may be wondering if another party may be liable for your damages. Private landowners and public entities may bear liability for the levee breach. Those involved in the construction and maintenance of levees may also bear fault.

Call our Sacramento personal injury lawyers today. We are experienced in climate-related property disasters and can discuss your legal options during a free consultation. If we validate your case, you do not pay us anything upfront. We do not get paid unless we recover compensation for you.

There may be a short amount of time to seek compensation, so it is important to seek legal help as soon as possible.

Injuries and Damages That May Result From Levee Failure

As far back as 2008, a research study showed that more than 1.3 million people in the California tri-county area of Sacramento, San Joaquin and Yolo counties would be living behind levees. The region is protected by a network of 1,100 miles of levees.

If these levees were to fail, individuals in this region would be vulnerable to life-threatening floods. This is in addition to the damage their property would endure.

Evacuation notices may be issued before a levee fails, but it is difficult for local governments to determine where exactly this may occur.

Individuals who do not evacuate in time may make a last-minute attempt to drive out of the area. If this happens, their vehicles may be trapped in flood waters. Not only can drivers trapped in their cars drown, but they may develop diseases and infections caused by flood waters.

Those who exit their vehicles to get to safety may experience serious injuries like broken bones. Debris in fast-moving flood waters may even result in severed limbs or death. Vehicles and homes can be washed away and destroyed by flood waters. Flooding could also cause falling trees that could injure people and damage property.

Who May Be Liable if Levee Failure Causes Damage?

One of the most devastating floods resulting in serious legislative action in the state occurred in August 1929 when the State Engineer was given full authority to review all non-federal levees higher than 25 feet or impounded more than 50 acre-feet of water. In 1986, the Linda Levee collapse in Yuba County resulted in long-term legal ramifications for the state.

In the case of Paterno v. State of California, the California Supreme Court found that “when a public entity operates a flood management system built by someone else, it accepts liability as if it had planned and built the system itself.”

In 2009, the U.S. Army Corps. Of Engineers determined that vegetation on levees was not compatible with levee stability and therefore needed to be removed. The state of California initiated litigation with the Corps claiming the new rules violated federal law. This resulted in the Corps amending their rules to allow some vegetation, but the increased risk of levee failure is unclear with the amended rules.

The standards set forth by the U.S. Army Corps of Engineers only apply to federally maintained levee systems. These standards do not apply to state-run, or Delta, levees like the Sacramento-San Joaquin Delta Levees. These levees are not built to withstand constant pressure of water.

This raises the question about the efficacy of the Delta levees in the Sacramento-San Joaquin area. The state has allocated billions in funding as far back as 1980 for levee repair and maintenance.

If the state did not take the necessary precautions to prevent levee failure, or the engineers and architects contracted by the state did not do an adequate job to prepare the infrastructure, the state could be held liable for your damages.

There are some factors to consider, though, including the following:

What Caused the Levees to Fail?

Levees fail for a variety of reasons, including natural causes like:

There are also human causes, such as:

What Mitigation Measures Were Taken?

Not only is the U.S. Army Corps of Engineers tasked with inspecting levees, but the State Engineers in California are as well.

The purpose of these inspections is to determine whether the levees require specific updates or reconstruction to prevent them from failing.

Even if the cause of the levee failure is a natural disaster like heavy rainfall, it is necessary to review whether the actions of the state were negligent.

What Are My Legal Options After Levee Failure Damage?

You may have several options for recovering compensation for damages you suffered due to levee failure.

Your first course of action may be to file a claim against the state for negligent maintenance of the levees. Thanks to the court decision in the Paterno case, you may be able to recover compensation.

If you were the passenger in a vehicle whose driver chose to venture through flood waters and you suffered an injury, you may be able to file a claim through the driver’s liability insurance. If you were driving the car, you may have coverage through your own insurance policy.

Legal liability for levee failure may be difficult to establish, especially when you do not have knowledge of the law and your rights as an injury victim.

Our attorneys have decades of legal experience researching and building strong cases on behalf of our clients. Let us help you.